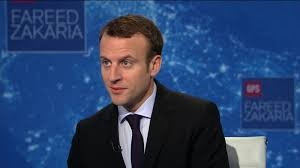 Macroning is the act of awarding citizenship to foreign born non Europeans whom promise to vote for the pro EU candidate.

Uniformly across Europe citizenship is acquired in a number of ways:
Macroning occurs daily, when refugee and asylum-seekers are in-country for five years to the current date. Then apply for, receive citizenship, and vote in such a way as to favor EU politicians, or pro-EU platforms in the case of referenda. It happened yesterday. It shall happen tomorrow. It shall happen when foreigners marry Europeans, and it is being fast tracked in order to facilitate Macroning on a wide-scale throughout Europe.

From The Boat, To The Ballot Box

Tomorrow, May 23, 2017, refugees shall be plucked from the Mediterranean, and brought into Italian, Greek, Cypriot, Spanish, and Portuguese territories. A number of them will pass away from disease. A number will be deported by reason of criminal acts. But organizations, such as any one of the nearly untraceable Soros charities, shall supplement their experiences in the name of charity with enough currency to ammene their gratitude. So, that by April 2022, two-thirds of these people contributing very little to society contribute their vote favorably to EU by reason of Macroning.

Since web-sites exist specifically to find marriage partners for refugee and asylum seekers, some nations have made it more difficult to marry and obtain a fastER track to citizenship. However, alarmed, and weary, I cannot locate what those injunctions to the marriage plan to Macroning might be, except a longer than two year hold on voting.

This will not help.

Fortunately the birth of children requires eighteen years to harvest that vote, unfortunately, that vote shall be harvested.

EU currently cannot force a member state to award citizenship to anyone, these are laws EU deferred to individual member-states as theirs to determine. Therefore this must be protected from attempts to alter by any means necessary.

Here are possible ways to blocking citizenship and the resulting Macroning:
Observing these steps is a start to dispatching the corrupting influence of the meta state as it is currently engaged. Failure to act means that the problems which rage in the Occident and Africa shall simply be renewed as Europeans try to live their lives around them.
at May 22, 2017