The Bomb won the election...nobody's fault but everybody's...

The adulterated legacy of Bill Clinton's presidency is a national shame. His complicated friendships with vile people, such as David Rockerfeller, may have been some elitist game. Rockerfeller, whose prime time documentary of false allegations against Clinton, rallied a fakenews lynchmob to end his presidency in 1995. The film alleged that the Clinton White House, in coalition with the president's brother, used diplomatic immunity for the purpose of importing cocaine. Yet, not only was Clinton aware that Rockerfeller was behind the slander, the two fellow cabal members remained friends until Rockerfeller's death.

In light of recent events, to include the ridiculous announcement of Hillary Clinton's intent to form another PAC, and resurrect an in-road to the presidency, ostensibly, by way of a New York congressional seat of some kind, one must pause to reflect the near-miss humanity suffered as a result of the amazing path of her very public, and very embarrassing, swan dive.

One must wonder if she is sane... with Google censoring very real factual bases for lasting public contempt for this vile person, could the recent press appearances in which Mrs Clinton echoes her utterly ridiculous and truly elitist "right to rule" all the proof necessary that she is in need of psychiatric intervention? All of the blaming of things like Russiahacked, which her husband invented, saving herself for her loss as the last item on a list of otherwise bullshit posturing and blame deferral: is she serious?

There is nothing right about this person. Her husband's presidency was a giant leap into the Globalist rewrite of history, and derelictions, which we have all come to expect from our leaders. "The president should be above reproach, and free of the conviction of high crimes or misdemeanors" is the qualifying statement. And I don't believe that murdering reporters, or a long list of pedophiles counted among the associations of a person, can do anything to defy the old adage, "You know the tree by its fruit."

Too much controversy, too much nauseating sociopathy, and too much blood to be touched by greatness: Mrs Clinton verily has never been in the room with it, let alone, capable of it.

Like a spoiled child made accountable for the depraved indifference indicated by her and her husband's "treasury-agent free underage and legal sexual encounters", her loss was what should've been the first struggling step on a road that leads to the penitentiary. And these denials follow the criminal acts and denials of she and her State Department's accountability for the horrific fate of US Ambassador to Libya, J Christopher Stevens. It is clear that not her virtues, but her vices have reached-out from the dark and lurid rooms of blasphemous intention, all the way to the deaths of innocent Americans: this person is done, and should be shown no mercy, whatsoever.


Few things encapsulate the election of 2016 than the shock on Hillary Clinton's face when she lost, because it says it all: the New England elitism that suffered her campaign is hypocrisy, she and her husband's connections to the OTO and smelly whore Marina Abromovic, as well as the longstanding connections between the Clintons and John Podesta, are pretty clear reasons not to doubt her darker urges, nor that they are both shared with her husband, and likely include pedophilia.

But nothing demonstrates the "lesser of two evils" didn't exist for election 2016 more clearly than the connections Trump has to Jerry Epstein.

Mrs Clinton can pout and fume till hell freezes over: but she shall never be the President of the United States. Ever.

The story she tried to perpetrate, not even mentioning pizzagate, which is real, but trying to push russiahacked, which is slander, means that she actually believes that the American public has not figured her out.

She is a criminal, treason is the least of her crimes. Snopes.com has failed to dispute the open and verified accusations against the Clintons in spite of fakenews stories and posts that they can debunk. There has been no disputing the criminal allegations which Mr Seaman has both raised, and suffered the unAmerican merging of Unconstitutionality and the right to inform the public of the truth, as well as the loss of employment mysteriously visiting anyone whom says,"pizzagate".

She is a spoiled idiot, and has no place in US government.
Do the Clintons not realize that demanding Google's obedient censoring of such things is proof of guilt, spoiled attitude, and complete unworthiness of the office of the presidency? Such family traditions!
We, in this nation, are already reeling from almost forty continuous years of just bad leadership. It is killing us. 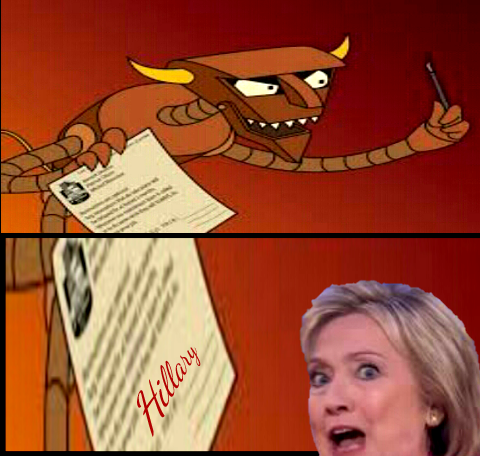 But if the Democratic party indulges the influence and name dropping that got her on the ballot in the first place, then it certainly deserves the laughter that I can hear from here.

So if she thinks 2018 will welcome her back into public life, then, in 2020, that she will, with her straining voice and extremely pompous view of herself, and her husband, mount a return to national politics, I say, "if the orange incompetent doesn't explode the earth, then the other incompetent will." So, let her...

Thank God for the bomb.