Anymore, when you hear the word Russia, it actually means Vladimir Putin. And this satisfies the western printing presses whom hungered after the hard-won habit of one word dissuasions from true consideration. One word, like Stalin, Kruschev, Brezhnev...

Yeltsin claimed to be a democrat. And instantly the west lost their favorite enemy. But soon corruption would chew like worms, and threatened the entire Yeltsin family with prison sentences, long prison sentences. Quickly, as power was slipping through his fingers, and in a very undemocratic way, Yeltsin named a relative newcomer to the PM post, former KGB Colonel Putin, whom, in turn, promised to keep him out of prison. Well...

There is good reason for the Russian support of Putin: he, quite simply, pulled off an economic miracle, restoring the GDP to 72% of the losses it suffered during the corruption of Yeltsin's years. He cut poverty by as much as 55%. He restored faith in a post communist world. And he ended foreign central banking arrangements, with orders to arrest, on sight, any Rothschilds, or any stars of the fractional reserve banking scene. This, he reasoned, had done the damage during the Boris Yeltsin years,

The long and short of it is, anyone whom the devil's spokesman and chief secretary, Henry Kissinger, says, in reference to anyone else, "He has betrayed the new world order.", then that person is someone we EU haters must honor with rock star like inexplicability. Vlad Putin doesn't always do right, but everything he does protects his nation from the pedophilia driven sociopathy of the NWO without sympathy, nor serious concern.

Although some of the things he does are ultimately questionable, slavs killing slavs in Ukraine, or the shooting down of a civilian jetliner, or the rumors persisting of assassination attempts against those he considers disloyal Russians, or against former Ukranian PM Viktor Yushinko, what he is saying by his actions is clear: Vlad Putin questions the NWO, the corruption of fractional reserve banking, as well as the murder of the Russian identity the same way he has watched the women of Europe descend from cleanliness to tattooed immoral clowns, and does not wish to see more, particularly in Russia.

Watching, as one by one, the politicians of the former Soviet provincial states sell their national existence, and their people's future, for their own personal gain against the sleazy and unseemly Rockerfeller-Rothschilds club, he must grow physically ill. But the soundest of doctrines protect his currency against the disease that is devaluating the rest of the world, and while the average European works too hard to take notice, the currency he holds is, in reality, a hot check. And sooner or later, that reality will hit.

But it will not hit in Russia.

Deals that inspire the Russiahacked conspiracy theory, in which the murdering Clinton family's hallucinating supporters believe, unquestioningly, that Hillary's excuse for losing the 2016 presidential election was accomplished due to the Russians _________ . (fill in the method, they are lies disseminated by the very ones who lost to Trump)

And, the theorists conclude, this was done to preserve the existence of the 500 billion dollar Exxon Roseneft deal, in which an effective merger would occur, and the vast Russian oil reserves be opened to the west.
This is not a threat to either nation, and inevitably would strengthen the dollar, as well as Russian ties.

But there is the Magnitsky Act of 2012, in which Russian business is highly electronically monitored. Among such things as proving Russiahacked is, indeed, a conspiracy theory, and a poor excuse, and how idiotic some people are for Clintons, as they could tell you, but won't, the Magnitsky Act also restates what the American companies that were robbed and unceremoniously tossed out of Russia need to learn: there will be no purchase of the Russian people. There will be no compromise of the Ruble due to fractional reserve banking, and there shall be no exception.

Again, the act was written due to 2008-09 American hedge fund managers being robbed, then hiring Russian attorney, Sergei Magnitsky, to represent them. Magnitsky turned up dead, as fractional reserve banking is actually counterfeiting, the threat this poses to a nation has enough bloody example you don't need me to tell you...again. To some, Putin is framable as a typical Soviet thug: but those people selling you that are insulting your intelligence. 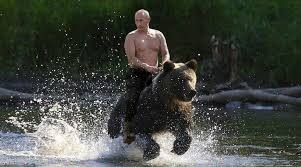 Mind you, this is not condoning his actions, but I do understand, and were I in charge in Russia, America would already be picking Russian lead out of its ass for their attacks in Syria...we can see Putin has a great respect for the US, but as sure as I am writing this: the US, whose citizens' silent consent over pizzagate, as well as their historic support for wicked men, does not know: its days are numbered.

For the first time since Byzantium the mystical draw of the west has ceased, and it ceased in the greed, or worse, the Merkel-ian incompetence, of the sulphuric cancer smell that accompanies stolen money when it is called your own, of the true sin usury is, and how not one leader in the west will stand both innocent before God, nor will the population whom allowed them, whose testament is more comely in experiencing the error of their ways.

The notion of an eastern monster has always been a myth, as best cited in a quote by the victim of a KGB double play, Yuri Nosenko, murdered by the order of CIA counter intel chief, the legendary Jesus James Angleton, whom said right before he died, "The myth of Soviet power is vital to western deceptions of its own people. We're not the problem..."

Nonsenko had his identity stolen by KGB Colonel Anotoly Golitsyn, who then claimed the real Nonsenko was Golitsyn. Having already tricked Angleton into his confidence, upon the declaration about the relationship, and the way power is misrepresented in the west, Angleton ordered his murder. It was one of the worst intelligence mistakes in US history, as the CIA office itself, was laid bare for the KGB for years to come.

Putin grew up in this world an ardent atheist, like his father, although his mother was as zealously Eastern Orthodox. He rose up through the ranks of the KGB settled in this world view until two tragedies, a car wreck in 1993, then a house fire in 96, caused him to question the atheism to which his father had been so dedicated.

His membership with his party, like Russia, herself, has been evolving. The fashion in which the role of the presidency became autocratic had observers in the west raising alarms, although now you are on the inside, and you know how and why these alarms are raised. He had been the 38th Prime Minister, held the presidency as long and consecutively as Russian law permits, through a deal with Dmitry Medvedev, to whom Putin gave first the Kremlin chief of staff position, in 2005, following the fallout of the Yeltsin debacle, as well as Putin's two terms (and the rest of Yeltsin's term 1997-1998) ending in that year.

Basically, Putin, and his party, which resolved themselves to Russian religious conservatism, cleverly circumvented Russian law, elections, and otherwise retained power between Putin and Medvedev. This has raised eyebrows within Russia, such eyebrows as those of former Russian chess champion, Gary Kasporov, leading a brief social resistance under the title, "The Other Russia."

Some protesters have wound up dead, as well as some reporters whom were in the process of investigating what is alleged to be widespread military corruption. And this is uncondonable, by any stretch.

But the essence of resistance to both EU, and the inexplicably still existing NATO, which the Ukranian Crisis represents, along with the reassertion that American seizures of Iraqi oil must also pass Black Sea ports, which should now act as deterrent to further idiocy by US forces whom are sent latently to seize oil in the region, is sound policy, in spite of slavs killing slavs.

But as usual, Putin is simply ahead of the curve, and it may take awhile before the Ukrainian people realize the crimes EU will actually perpetrate in their country.