How Much Influence Does Merkel Have Over EU? 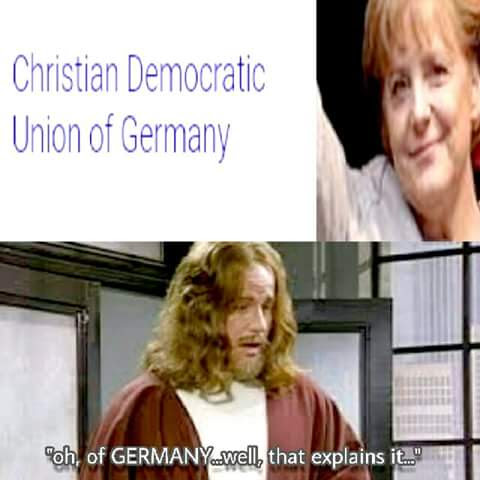 During the televised debate between LePen and Macron, LePen accused Macron of being Merkel's lapdog, as he stammered to dispute the claim, LePen added, "No matter who wins Sunday, a woman shall be running France, her, or me!"

In the eyes of many Europeans, Germany's central role in the creation of EU throws a bad light on the Merkel presence and influence over EU affairs. EU is a German joint. Indeed, after Brexit, honest doubts emerged as to whether German would replace English as EU's official language, and whether or not the DM could replace the British pound as the principle currency backing up Eurozone transactions.
Who is Angele Merkel, and how is it she is able to wield so much influence in EU? And how often has EU defied her?

Between the years of 2007-2009, when a fundamental EU constitutional reboot altered the EU Council presidency, Angele Merkel held that post. She also helped to negotiate the article of the Treaty of Lisbon which removed the old way, that a nation's leader also served as EU Council president. This was due to many factors not the least of which are implied conflicts of interest, the offense to democratic process, as well as the inability to focus on national interests simultaneously with those of the meta state.

By this time she was already a prominent figure in EU, and Madame LePen's comment to Macron, as vivid as it is, and as frightening as it is, is also quite true.

Frau Merkel's identity seems to be at odds with the natural Europolitique to abhor this much international influence. Yet, much like the very fine details of the EU composition, it is difficult to cite any trustworthy or honest point wherein the dichotomy of her relationship with conflicting power bases could be described, in any way, other than legal, allowed, and  unlimited.

She remains, citing Wikipedia, and millions of European citizens of both of member and non member states, de-facto head of EU. Angele Merkel is EU. The faces and names of veiled efforts at power being fairly divided, Juncker, Tusk, Rompuy: Angele Merkel is the only constant in EU's power structure.

Merkel's relationships with Hollande and Macron are well-known, as both of these pro EU Frenchman have accepted at least one of the policies of the only EU official whose term is undead, and will never end: immigration.
Immigration is not the only pressure driving French Euroscepticism, but it remains a gaping hole of vulnerability in the eyes not only of the French, but all Europeans.
If there were one example of the need to clarify, and checks and balances be applied to Merkel's unending term as EU boss, immigration, and the free movement of non EU born citizens, are the most urgent.

But immigration is not the only EU policy on which she took the driver's seat. For Grexit, as the crisis emerged and threatened to divide the EU for the first time since its 2001 founding, she took the lead. Merkel, as well as the Bundesbank tried, in vain, to secure enough capitol for Athens to circumvent the crisis. Merkel's govt also heavily pushed for, and recieved the Austerity measures, which were an EU wide group of legislative measures that were designed, among other things, to keep economic vitality flowing in order to offset the Grexit crisis. As 2011 became 2012, it was clear that the Grexit crisis would not, and could not be avoided.

In national politics, this would result in either snap elections, or a national election would replace the elected official whose personal energy had driven such a failure, but in Merkel's case, she has this kind of influence. And there is no way to cause it to end.

It is clear that LePen's concerns over France's duplicitous power- sharing with Merkel, and Germany itself, are the revelation of an identity within Europe that should be questioned rigorously, as the conflicts of interest that drove the changes to EU composition Frau Merkel had helped to realize in 2007-2008, have no means to limit her, to this hour.