ESS, European Satisfaction Survey, is one of the more absurd concepts being budgeted annually as a part of the €15 billion which EUROSTAT publishes to be its annual budget. ESS is attached to and funded by EUROSTAT under this name due to inclusions of non EU member-states, like Norway. Oddly enough, Norway is the nation identified by the ESS as having the greatest per-capita satisfaction with life, and demonstrates the greatest satisfaction with their government in all of the more than thirty nations which are part of the survey.

"Individuals' satisfaction with life varies depending upon whether or not they perceive their political regime to be legitimate?" -ESS DOC


The fact that Eurostat itself concludes that there are like fifteen to twenty categories by which we might baseline a chart of what happiness looks like in print, then concludes that the refugee phobic non member state Norway has the highest degree of happiness is exactly why I view this agency like I do.

There is a pdf file on the Eurostat site, if you don't believe me. It is under the subheading ESS, and from the looks of it, took at least a million or so just to construct the website.

This is how I recommend Eurostat be analyzed: since it is small, the normally inadequate regime analysis, in which we view the internal structure only in terms of its executive functions, and only observe how it responds to criticism, will not limit any positive aspects of Eurostat. Regime analysis is shunned in political science because it could make the positive aspects of an international organization very hard to see, because it does narrow an otherwise broad scope.

I will do that, since it is what I learned to do in University. What I will then do is occasionally blog the bits about Eurostat, since part of regime theory requires I also observe how Eurostat copes with criticism, as well as might change its approach over time.

Today, however, in order to best demonstrate the absolute huge expense Eurostat is, and how such conclusions as ESS's deductions on Norway would tend best to demonstrate EU should be disbanded for being the kind of hypocrisy it is, going on in front of ordinary Europeans on a daily basis, I will simply excise a cross section of ESS, and try to show you that apparently Eurostat feels non EU states have a better degree of happiness.

The Pushing of Democracy
I am not certain that it is democracy being lauded, since the facts about EU conclusions could tend to classify it as an oligarchy, which means that a council of elitists are running the show, and goes to better exemplify that the results of the million euro ESS study are simply being published which dismiss EU as a place in which happy people live.

"Reseach shows that higher well- being contributes to many important outcomes of interest to policymakers such as better health and higher education?" -ESS DOC

Again, this statement would tend to disqualify national crises such as the one arising in Germany, where recent protests as to the legitimacy of the Merkel Administration in Berlin continue being ignored in the media. Besides sounding like it was published to attract a higher degree of corporate confidence in the exploitation of, in particular, the emerging EU corporate combine in EU eastern Europe, this statement sounds suspiciously arrogant, as if the aim of the survey was to comfort someone, or some group. 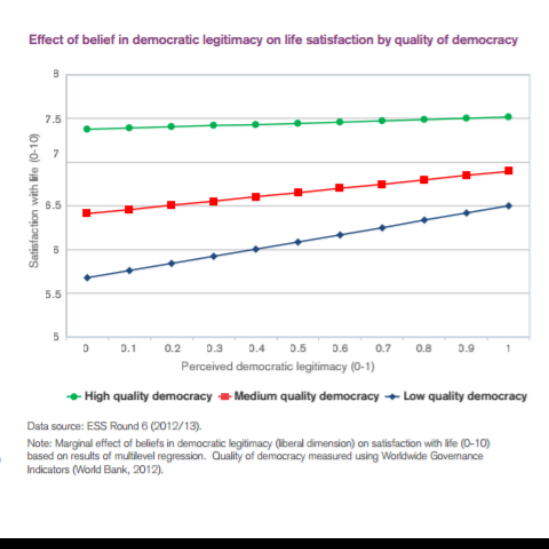 Nations whose citizens believe in the legitimacy of their democracy have happier people, you don't say...?

Due to Merkel, in particular, being flexible enough to address the Visegrad Four, however unsuccessfully, we would normally see this regime statement prompting such policy reform as getting the refugees out of Europe. But, then again, if unchecked, then they and their children may well become the Europe reading and considering ESS.

The two "did you know" conclusions are all that I want to bring to your attention today, remembering, of course, that ESS has served EU with either a cause to initiate real changes, or Europeans will continue to become more advanced in their state of disillusionment, or more sinister in consideration, that EU is already planning on replacing the workers of Europe with refugees.

This is yet another example of sublime truth remaining unflinchingly the source of real Euroscepticism.