Double Jeopardy: Why Vučić Is Right About the OSCE 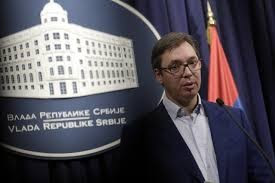 I want you to listen very carefully: because there are more times that you will hear me agree with Bill Clinton than with Serb President and Prime Minister, Aleksander Vučić. You see, the EU bosses want more corporate slavery, as well as a larger tax-base. So, like Hotel California, they are programmed to receive. And, while Croatian media angles seem to pervade even the informed comprehension of Western people as to every possible angle of the Kosovan War, let's get straight the two sides of the story about the war, itself, the role of OSCE as it sees itself, as Serbs see it, and the further divisions occurring between Serbia and EU.

What Vučić is saying is that the result of the NATO/OCSE mission in his country, and those near about, is based on the advocacy of the agitators whose efforts resulted in all of the violence, in the first place, which is Albania. It is also based on a bias against Serbia forged in the media, and in the German chancellory. And, Vučić is CORRECT.

The Kosovan War
The Kosovan War did not actually occur the way which it has been portrayed in the West. One way to guage this quickly is the status of both Croatia, and Kosovo as member-states of EU, with both Serbia and Albania, historic enemies, still engaged in what was seen to be a foot race to complete the prerequisite thirty five Articles of Ascension. Recent acts by EU luminaries may have finally killed-off Serbian attempts to join EU completely.

Most Americans were sold the Clinton-version of this story. Even veterans whom fought in the air-campaign, and those whom currently staff the NATO missions in Kosovo, for the most part, remain unable to pass even a cursory examination of the conflict. They cannot even begin to describe it in an outline form. This reflects a poor doctrine that drove the US involvement in the Jugoslav Civil War in the first place, and has not ever improved. And the Serbs are tired of it. The reasons for the misunderstandings still persist, as do NATO missions overseeing the resolutions of a very complicated and poorly understood set of issues, whose elements do not make for good media bylines.

Indeed, it was much longer, and a more divisive conflict than it was portrayed to be in the international media.

This is a story of betrayal, bitterness, and the attempt to place blame upon what could be considered the equivalent of the Northern Army in the US Civil War. Omitting slavery, both of these wars were fought to preserve national unity.

The sanitized Clinton-era version holds that from 1991-2001, the evil Slobodan Milošević lead the Serbians against the Muslims, whom were rounded up and slaughtered though they had done nothing wrong. And this is the widely-accepted version of events.

The truth is far more complex than this. In essence, the international press became involved during the phase of the series of wars which saw Serb retaliation against the Muslim terrorists in their nation become a forced repatriation to Albania, as Albania was indeed fueling efforts to bring about the breakup of the old Republic. In these efforts Albania caused the first phase of the war in 1991-1992.

Albania's government was heavily involved in an effort to accomplish a kind of one-upsmanship, due to historical animosities between the two dating back almost two thousand years. The JNA, Yugoslav National Army, having been lead by many whom became compelled to believe that if permitted to break up the nations which composed the Old Republic of Yugoslavia, that the binds of political ideology were only a ruse to be used by the Albanians in order to continue funding the acts of terrorism which resulted in the first phase of the war. Thus, the conflict would not cease until Beograde itself was levelled, and no Christians left alive. This was the motivation of the second phase of the war, in which the Serb Army consolidated its territory, and we see the emergence of Slobodan Milošević as the ruler of the nation which would become Serbia, between 1992-1998.
In these years, the concepts of an independent Croatia, Kosovo, and Montenegro were not yet understood.

The atrocities portrayed in the media were one-sided, and in the mindset of the Serbs, ridiculous, and yet another reason to doubt the west. Indeed, the religious differences trace all the way back to well-before the Austro-Hungarian Empire, and its attempts to close the road of invasion which was used by the Ottoman Turks routinely, common-foe to all-involved except Albania, which remains the only Muslim European nation.

Keep in mind, EU doesn't yet exist, and so the European response was to have the entire war analysed by the OSCE, the Organization for Security and Cooperation in Europe.

The Organization for Security and Cooperation  in Europe
American William Walker, the man appointed by the OSCE as governor-of-sorts, played a major role in the way the wars were either oversimplified, or worse, totally written out of the historical account due to him personally having no experience in the region. Therefore the final result of UN resolution 1238 was absent of both understanding, justice, nor did it accomplish peace in the region.

For example, after being forcibly disarmed by NATO, whose lack of sound approach, totally disarmed the Serbs...but did nothing to disarm the Croats, whom had been allies with Serbia until the OSCE/NATO involvement. When suddenly Serbian soldiers were massacred on the Croatian borders by Croatian troops, it was a throwback to the historical muscle-memories that guided Croatia, as now it heard the call of the past. Having been the nation most responsible for first Austrian collaboration, then NAZI collaboration, and now, it would seem, NATO collaboration, Croatia asserted its own sovereignty to the new order in old and familiar fashion.

Walker's inspiration seems to have been completely guided by the design of German Chancellor Schroeder, whose upvotes for the military intervention through to the murder of Slobodan Milošević were based heavily in historical bias, and definitively the incorrect approach. At home, Bill Clinton was fighting for his political life in the Monica-gate scandal, thus his quick response to support UN Sec Gen Khofi Annon was driven mainly by lessons both had learned in Somalia, and Annon learned in Rwanda. It could be said that these lessons were shoot first, ask questions later. And thus OSCE was given Walker's appointment, as well as the NATO military effort, by a distracted Bill Clinton.

The OSCE, under Walker, whose previous diplomatic experience can best be summed up as the CIA's Man in Latin America, where he had been ambassador to El Salvador during a time of extreme yet illegal US intelligence and military efforts in that part of the world, was forwarded the job by a cooperative effort between Europe and US. Though he was born in the 1930's (1931), he remains at this appointment.
What he brings to OSCE is a very strong background in covert and conjugated military and intelligence efforts to subdue a nation.
But what he represents to many Serbian people is the continuity of a flawed process and even greater-flawed result. That the OSCE is not very good at cooperation, and uses NATO as security by forced compliance, is the Serb perception of the entire affair. Meanwhile, the efforts by Walker to continue this heavily biased outlook in regard to Serbia remains a critical factor in both EU ascension, as well as East West relations. The call for reformation of this effort is going out, and with it, so should William Walker.

The World, According to Vučić
The very easily arrived upon conclusion is that Vučić is right: the Shroeder-guided EU "let Muslims kill us" doctrine is one that was a hard sell for him to make to the Serbian people. This belief, that Albania has been victimised by Serbs, is merely Schroeder's belief, and it is not true. Even if it were, the real cause of the conflict, Albania, has learned all too well that Walker and the OSCE intend to allow both a cold EU membership via its Kosovan puppet-state, as well as continue unfettered in its ongoing efforts to exert a negative presence in the region.

This may be viewed as reluctance on the part of Vučić and Serbia to join EU, and it may be viewed as "blackmail", but the storm brewing geopolitically makes this a very poor analysis to follow: right now, the time to correct these mistakes could benefit both EU and Serbia. The fact is, this flawed approach cannot continue, and great harm not be the result.

The facts, like the Serbs themselves, remain wounded and graceful. But this cannot remain an indefinite burden upon the Serb Foreign Ministry, nor in regards for Serb acceptance of the necessary conditions to join EU.
And right now, the west's record with promises has not been, shall we say, one with a record that could compel the suspension of anxieties?

If peace is to remain in the Balkans, then the advocacy, and the missteps of Albanian sympathy must be corrected. If not, the likelihood that Kosovan/Albanian violence being forgiven is certain, and so would in-roads to a Serb-Russian Alliance.

And this, when considering the manner which EU has corrupted the democratic process in France, may be the best solution.
at May 11, 2017