The practice of fractional reserve banking is the same thing as allowing banks to lend money to governments and corporations which does not actually exist. Through a set of well-rehearsed financial gymnastics, the usurious interest creates money from nothing. Thus, a bank can legally lend $100, and immediately inflate its own accounts $8000, and then lend that, and it is way too easy to see: the system is a crackpot lie. 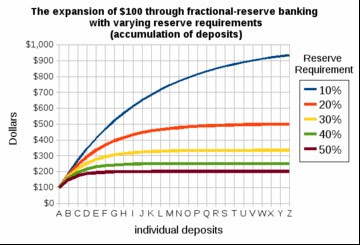 In essence, banks can simply order the reserve banks, privately operated by the Rothschilds family, legally around the world, illegally in the US (we will cover that later) to print up the non-existent funds with no gold, nor silver, nor oil-reserves in which to back it. This is the very definition of inflation, printing up money that doesn't exist, because it makes the currency lose value.

In this way, the Rothschilds Conglomerates hold the earth in a clammy and breakable stranglehold. The reason that it doesn't get broken is because most folks simply choose to ignore it, believing it is above their intellectual capacities, or are afraid of the simple truth, so they simply choose not to look at it.

On June 18, 1815, the Bank of England was sold short by the manipulation of the bond market by Nathan Rothschilds. This resulted in his acquisition of the Bank Of England. According to the oddly named Skeptic blog, and the Rothschilds themselves, this is a conspiracy theory invented by the French, despised by both British and German Rothschilds. Skeptic also denies that the Rothschilds own the central banks of many nations, but that is a baldfaced lie...

But it is also a non-point. The fact is, the mortal sin of usury possesses this status because of the ease with which ruining a nation can live in the accounting records, as well as die in the inflation, of the bankers of this world.

Both Syria and Libya resisted the call to assimilate, and have suffered the arrogance of applied consequences.

Whether or not you choose to accept the facts, it will take another generation to forget that the Rothschilds' fortunes grew from war-profiteering, and bankrolling the British military, as well as the rape of China, India, and the rape of Africa, culminating in a broke and desperate Britain selling the Rothschilds a jewish homeland in Israel in exchange for securing a steady supply of cash to bankroll the British during WWI.
https://en.m.wikipedia.org/wiki/Balfour_Declaration By that time, the era of fractional banking's more abstract principles of interest and inflation-causing lending practices were already well in place...

The system of banking that unites the macro and microeconomics of worldwide endeavors is being accomplished with imaginary money. The fact that this has already been a practice which is entering its third century means that it is not ending until we do.

The system which gave birth to EU is not the song and dance of the emotionally evocative concept of "unifying a continent". It was the consolidation of the banking institutions which the Rothschilds family either owns, or controls. And to believe otherwise, as the mythology of EU's sixty year existence, is nothing short of self-published nonsense. At its worst, it conveys the message of a unquestionable authority of EU by reason of great age, "give us the confidence your fathers did..."
At its best, it is a magic trick whose cracks show often, and the secrets cannot be suppressed as they were by the assassination of JFK.


To continue inflating the amount of money in order to continue offsetting that money's actual value is the death of empires.

"If ever again our nation stumbles upon unfounded paper, it shall surely be the death of our body politique. This country will crash."
-George Washington

What we are talking about is the exact same reason counterfeiting is such a despicable act in the eyes of ancient cultures, what we are taking about in fact is counterfeiting! And not just of currency, but the deliberate attempt to affect history which has resulted in a world full of people whom, by a disturbance of natural logic, believe that it is simply wrong to point out what the banking elite have done in front of us: if you are not supportive of Israel, and you question the revisionist history which the Rothschilds family has compiled and published about itself, then you are an anti Semite. That is NewSpeak rubbish. Whether or not I personally embrace the disease that is defiling the financial vitality of my country lands in one of two categories: 1) a wise man, or 2) a fool. Any further examination of this is part of the smokescreen which has enabled this fractional reserve banking system to prosper!

Look at the banks in UK, Spain, France, The Deutschbank: they are all broke. But the bankers whom have created EU to make this counterfeiting fraud easier to accomplish are wealthy: unimaginably wealthy.

"The few who understand the system will either be so interested from its profits, or so dependent upon its favors, that there will be no opposition from that class."
"Who issues a government's currency controls that government."
-Mayer Amshel Rothschild, both of these quotes are from the 19th Century
This does not jibe with the revisionist history which has smoke screened the justifiable blame that belongs to the Rothschilds, yet should the matter be made clear, the NewSpeak resorts to labeling one to be anti Semitic. In essence, 2+2=4 is now Anti Semitic.

The reality of EU is that rather than twenty eight nations on twenty eight different tables, and fluctuating exchange rates, complete with the duties paid to transfer twenty eight currencies into other currencies, you have a consolidation of banks, which makes fractional reserve banking easy. Then, as a result, what you have the first magnitude of the highly offensive fractional reserve banking creating fractional GDPs in its own image, complete with a bevvy of misleading and inconsistent statements as testament to EU's great age.

Meanwhile, the quote about seeing the system clearly just got Macron elected in France, and somehow calls this fascist abuse of the banking realities and the working class "centrist and moderate".

In the US, Kennedy referred to the Rothschilds system as an UnAmerican secret cabal, not only is his speech easy to find, but so is executive order (EO) 111100, in which the last true American President spells out the ousting of Rothschilds' and Rockerfellers' wicked cabal from the coffers of democracy, in an attempt to prevent the corruption of a free society which he did not succeed in accomplishing. But had he not spoken to the nation directly, we would not know, and he would have survived.
content://media/external/file/86574
The fact that his innocent blood dissolves the NewSpeak like acid should free you, human, from the culturally embedded fear to see this system for what it is, and how it has corrupted our nation, and created the nauseating meta state whose citizens suffer within democracies protected by the import of immigrants to secure the persistence of the offense.

So, whether you're this or that, no matter what, if your religion is not an enemy of fact, then we are not truly enemies.
at May 08, 2017