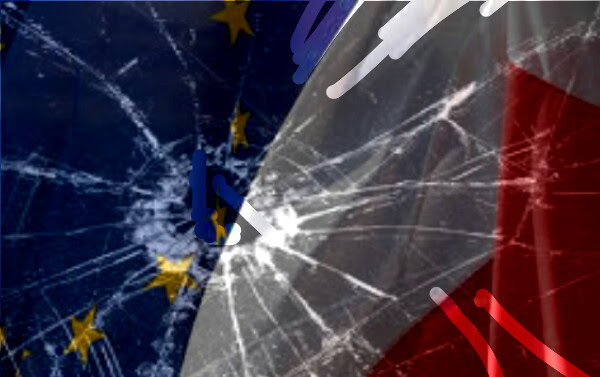 Can there be a reason for the German President Steinmeier's visit to Warsaw, other than Frau Merkel feeling the cracks in the stars of unity?


In 2004 Poland rewrote fifty plus years of Cold War tradition, shattering molds, and pushing wide open the doors of a nation that emerged from the Pact that bore its name, (Warsaw Pact), and ten plus years of changes to which, as a nation, it had weathered well, and with Slovakia, Hungary, and Slovenia, Lithuania, and Latvia, they joined EU. And for Poland all was going well.

But this is only for appearances sake, as party divisions, as well as an attempted EU audit of Polish governmental functions within the nation have upset the applecart. But the final straw bearing upon EU, and the Polish politicians, has come down to the ECHR-15 immigration and refugee issue, and it is doing damage.

Already the first nation to form the bloc of four nations refusing to comply, the Visegrad Four, (Czech Rep, Hungary, Slovakia, and Poland) Poland has become a thorn in Frau Merkel's side. Sensing the troubles to come, and in attempts to secure and preserve the burgeoning visibility of the point of breaking, German President Frank-Walther Steinmeier was dispatched in a simultaneous damage control/ info collection mission this week. But the turmoils pulling EU apart were ignored by EU when the issues could have been prevented from becoming the crash and burn which comes...

Again, like Brexit, nobody in Strasbourg listened. But is it their fault? It is sort of a tradition at this point.

Poland's role in EU had been comfortable. Even in the 2010 devastating crash of President Lech Kacynski's ANT-24 Transport Aircraft, EU's underpinning of calm and order was vital to the healing the nation underwent. Highly visible were both Angele Merkel, and then Prime Minister Daniel Tusk, current EU Council President. And all seemed well.

Until the door was slammed tightly against EU with the formation of the Visegrad 4, obviously then it was determined that EU had the obtrusive right to examine the internal machine of Polish politics a bit more closely. And this has become a second front in the functional Euroscepticism Poland has pioneered with the V4: does EU have the right, authority, or responsibility to fund opposition to the Eurosceptic Law and Justice Party of Poland, does EU have any executive power to alter the current trend in Eastern European regards for EU mismanagement, and if not, who, and how, can EU (she) be stopped?

It seems that the Polish Law and Justice Party has been stacking political appointments in their Eurosceptic favor. Donald Tusk, PM appointee, under the unfortunate Lech Kacynski, as well succeeding presidencies, belongs to the closest thing to an opposition party to foil the Law and Justice Party, the Civic Platform Party. He is also the current EU Council President. Obviously, this provides Tusk, and EU elites with a unique perspective on the matter, as it opens the doors to examination of multiple aspects of Polish political details, but what it does not do is alter EU's role as that of a meta state with no power to alter or in any way effect the internal regimes within a member state.

Thus it appears Frau Merkel, Jean Paul Juncker, and Daniel Tusk intend to try and offset the immediacy on the other end of the "exit drama" sausage, the breakaway republics of the Visegrad Four, chief cook and bottlewasher: Poland, and the Law and Justice Party. And it could mean a militant enforcement of any number of treaties, or articles thereof, to pull the Poles upright and into alignment.

This is a prelude to overreach on the part of EU, without enough pressure, the functional Euroscepticism could end the careers of Merkel, Juncker, and possibly Tusk in EU. Too much, and it could end EU. This is one of those situations where I envy the fly on the wall in the meeting between Beata Szydlo and Frank-Walther Steinmeier...


Pure analysis determines it had to sound about like this:
FWS: What can we do to not look like demagogues when we point out your government looks stacked with L & J party picks who will engage Polexit?

BS: Oh yeah, have I reminded you how butt out, k?

And if it went this way, we can be sure that two committees are being formed: one to end refugee collection, and the other to remind them they have to do it immediately.
And either way, Frau Merkel's presence in EU isn't over....it shall just fold, then reemerge....like wings. The fine-print of that reversal on immigration shall make the rounds in the press like Christmas carolers sing, door to door in celebration, but it isolates and raises the better point of democracy: when one group, even if that group was bankers and lying the whole time, but when they cry "Democracy", then curtail ulterior motives which cannot suit the majority upon whom this fraud has been perpetrated, can it be tested? After all, they did cry democracy...

Archimedes famously said, "Give me a lever large enough, and I will move the world!"
It would appear that that the ECHR-Ver 15 was too much, too quickly, and represents a serious circumvention of democratic process, and the Visegrad 4 may be hitting paydirt with this functional Euroscepticism.

As outwardly it appears the Visegrad 4 shall either dismiss the strangers from their house, or EU from their nation.