Can't Hide The Warts: What Is Eurofound? 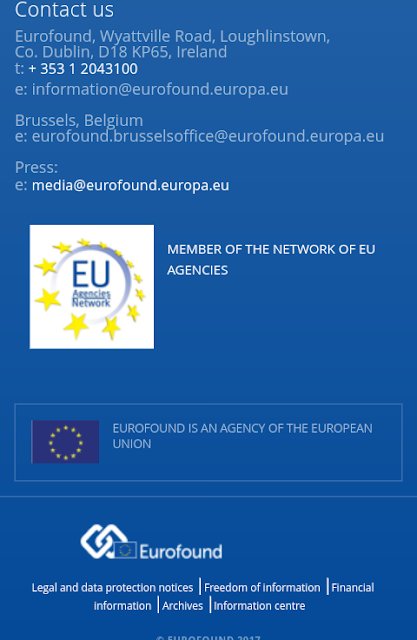 "...to provide high-quality, timely, and policy relevant knowledge as input to better informed policies in the following six areas of intervention:


Eurofound is short for the European Foundation for the Improvement of Living and Working Conditions. It is the agency responsible for creating social change within EU. And it does so in a variety of ways.


Eurofound appears on the list of decentralized agencies, meaning it acts autonomously. But it remains unclearly defined in the areas of executive form, and how it remains under the authority of EU. It is clear that it is under some exertion of control from outside of its executive, and the term "decentralized" refers to how its budget is itemized.


Nothing surprises me about EU anymore. When I look at the founding statement of this organization, Eurofound, it looks more sinister by the minute. It actually appears to be designed by the steering committee of the Bilderberger group, in fact, it would be ridiculed as "social engineering" and "a political form of mind control" if it were the Soviet Union we were talking about...

But Eurofound was created to do just that. It acts as the implementer, the tool, by which the erasure of moral clarities and private lives is being carried out, and dug out. It is a public version of a steering committee. It is an action agency along political lines, and does not protect workers unless they are the immoral ilk being so pursued by EU. May I be so bold to say that the declaration of transexuality as legitimate is nobody's official responsibility? Social engineering, however, requires the appearance of a legitimate course of inquiry.

The facts remain that these populations are so low and inconsequential that what Eurofound is really doing is creating an atmosphere of casual acceptance of the self-harm transexuals, for example, are doing. By pushing this agenda, they are attempting to divide the working class, and by dividing the working class of both their senses as well as their morales, the high road to rule shall be traveled solely by their bosses, as these types of agendas do not require this kind of social steering.

It is inexpensive, too. This "tripartite" organization draws 20 million euros annually. This means that it is very small. But it has a lot of power as far as public relations becomes mind control, Eurofound has advanced over the last sixteen years until it is the political and cultural retraining center for the whole of Europe.

Like EU itself, Eurofound believes its own lies to be written in rock by the Gods of Paperwork. In 2003 the EU created Eurofound and designed a dynamic and well-controlled regime, which can seldom act independently. They are given a pursuit by committee, then, based in both Ireland and Brussels, Eurofound engages the normal media of mind control.
Eurofound is the initiator of the blurring of old and patriarchial values which sustained Europe for thousands of years. Unless they are hiding the cure for AIDS, they are working a population control angle beneathe the other subtleties lurking latently and beneath the obvious.

Once again, as with any EU agency, the fact that it is only sixteen years old, or younger, as many agencies of EU are, is in the details. The European Foundation for Quality of Life was given its life by Conseil De L'Europa decree in 1975. There was a very slow start due to the many mercurial areas of focus, as the organization appears to have been suffering from an identity crisis. The late ninteies saw the point where the founding statements currently guiding Eurofound, as well as visiting Europeans in everyday mind control, were nailed down a bit more clearly.


I am certain that gay marriage was the first major victory for this group, but the solution is actually a more far reaching problem: if Europeans can die of Aids and not reproduce, then the elite procure the entire continent within one generation. Not that difficult to figure out, really, except that it seems to be taken straight from David Rockerfeller's "How To Take Over The World" handbook, complete with not acknowledging that even he, too, must one day answer for these heavy handed abuses of the working public.

The names of the lies citing Eurofound's autobiographical inconsisitencies follow along the the identical path as that of EU: in 2003 they simply all agreed to repeat this lie henceforth, and they named the lie COUNCIL REG (EEC) No. 1649/2003. These lies have a count number, the 1649, and the year that the regulation became effective, which clearly defines Eurofound as an organization that is merely fourteen years old. And this is correct. In fact, the most objectionable parts of The Thirty Five Articles of EU Ascension have to be agreeing for each member state to comply with this twisted root from which so much bogus and inconsequential information issues forth, in exchange for their chunk of 20 million euros, which declines across the board when new member states join.

It is most likely that Eurofound employs mainly artists and pamphlet level writers. Their organizational structure indicates that their various pursuits do not really face determination from within their offices, but from one of the three divisions wherein a stronger and more authoritative organizational structure is guiding theirs, influencing theirs, who, in turn, influences Europe with barrages of pro agenda propaganda.

It is likely, for example, that the misuse of the word xenophobia, which is a fear of the unknown, was concieved as a strategy by EU, and Eurofound probably had a hand in it. But Eurofound did the work which actually retro-defined the word to be a specific fear of immigrants, then turned it against exit voters during Brexit like hoses against the Freedom Riders in Birmingham. I am old, and studied phobias in college, I cannot recall xenophobia having any other definition than that. Chances are that the pop cultural potential of the word has finally resulted in its coinage on the phobia list as fear of immigrants, or strangers. But due to the fact that it is highly incorrect per the actual Greek meaning of xeno, that the campaign against Brexit was guided this way and covertly by Eurofound.

I had a very good abnormal psyche professor, Dr John Mayhall, and his definition of xenophobia came straight from the text. The new definition still falls short as inaccurate, and exposes hypocrisies that underscore the marginalization of anybody whom objects to the vision of the society globalists seek. You cannot call someone gay without objectifying them. Under Eurofound, power has been delivered to a minority which it defends while together, they use name calling and bullying to marginalize the majority. It simply cannot work.


A phobia, as defined by the DSM-V, is "a persistent and irrational fear often requiring medical and or pharmacological intervention." The usage of the word xenophobe is incorrect for a number of reasons, most importantly, that these are irrational fears. It is plain stupid not to abide rational fears: or we would not look before we crossed a busy highway. With brexit, Eurofound learned how to implement these words online and in targeted ads. Now fully saturated, the word xenophobia, which once was related to panophobia, referring to fears of the unknown, the web only defines xenophobia as a fear of strangers, and curiously, immigrants. Xeno means "all of it" in Greek.

Number three in their itemized list of mission goals, Eurofound designs Labor Market Change....well, you know who the labor market is, right? It is specifically you, the working class in Europe. If the Democrats in America do not learn from their unquestioning deference to the absurdities of EU, 63 genders, and all, as a party, they might be done for.

Do you know what drives the migrant policies of EU? Social Darwinism. The bosses, bankers, Rothschilds, and the like, want Muslims to do those tasks lowest in the eyes of bankers: cook their food, drive their cars, and otherwise become slaves for a joke of a salary. This is very much behind the EU redefining refugees and migrants to be all refugees, and Eurofound is how the change is accomplished.

Do you understand what change in the labor market it is that this agenda means to drive? It has already begun a change in the electorates of European nations, and it is Eurofound whose ad agency like tactics have erased any notions of "the old way": where Europeans work and elect leaders in Europe.

There are probably strategies being designed right now, to either prevent, or to slow the process of each of the Visegrad Four, as well as the politicians in the increasingly Eurosceptic parties within Slovakia, Poland, Romania, and Hungary, as they prepare to exit EU. EU, which ignores very real need for immigration reforms, but will resort to name calling and threats of war with Russia, rather than discuss those needs seriously.

It does not require genius to find that EU is desperate to retain power, in such a way as to consider that it might be pursuing an outline of events upon which it is so focused that it simply doesn't care about reforms it must make. Or, those reforms are going to threaten the view of power its leaders have, meaning that its a deal breaker in terms of their careers.

But that is another Eurofound duty, to oversee the convergence of EU, thus once migrants are brought into Italy and set foot in land, two things happen: the clock begins ticking on five year voters being created, and Banco D'Italia slips one more mouth into the socialist realities of short-funded EU policies, as well as Eurofound, the policy police of EU.

This is by far the most deadly agency in EU, not in terms of killing, but in terms of "why does an agency like this need to exist?" We don't know who makes the decisions that Eurofound converts into ads, because it has little or no functional transparency, and seems to be solely organized to guide society into a more immoral condition.

With power must come morality, it is treason otherwise. And, in the giant bureaucracy EU is, whom shall do the time when they get caught?

Because the best things in life are free...until you get caught.