Can't Cheat the Hangman: The Fall of the Euro 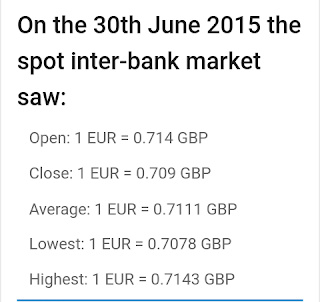 The dire predictions and threats issued by the denizens of EU, to include a war with Russia over Ukraine had Hillary won, are all largely nonsense. The fact is, immediately following the Thursday, July 23, 2016 brexit vote, artificial market manipulations, mainly brought about by speculation, resulted in what EU hoped would be a trend against the value of the Pound Sterling which never materialized. Meanwhile, the USD, whose intrinsic international value is based upon military successes and oil market solvency, has lost value since the April 7 False Flag event which doesn't mark the beginning of military failures, it simply brought to light the aimless military direction of US planners and, indeed, if such people as planners actually existed at all in the US's presence in the region.

Meanwhile, the public, still weaned-on EU's faked biographical age, cannot recall that prior to the 1999 UK referendum which resulted in the Kittinger Treaty, and in the weeks throughout the end of the century, the DM traded at DM 3,80 = $1, while the Pound Sterling was around the value which it has against the dollar trending throughout that decade, ranging between £1=$1.11-1.29.
Which, despite forecasts of doom from EU Council and Commission authorities, means that the Pound Sterling became the Euro, and until 2001, the Euro was the DM. This 2001 compromise resulting in UK entry into EU suspended any potential restoration of that economic truth. However, without the Pound, the Euro stands to lose the bulk of its current value by the date of Article 50's inevitable result. Now you comprehend the looks of desperation on the faces of the EU's luminaries.

If you have read the news today, there are at least a dozen varieties of hit pieces rolling out hourly compelling a loss of confidence in the British Government's direction. May I be so bold as to remind you: this is the British people's direction, and democratic process's engagement? And, are these stories being planted for nothing? Where there's smoke...

EU is great at dragging exit coalitions through the mud. But they are horrible, when it comes to the money markets (and avoiding their sublime truths) at fooling the all of the people all of the time.

Not like EU's frantic registrations of asylum-seekers in France to vote in a nation's election wherein less than one quarter of them actually speak the language, yet were directed to vote for a man whom shall reduce their conditions to about what Africans have fled: poverty, inflation, and more of the same, or LePen, whom would demand their repatriations. It isn't about EU exit by France at all, it is about holding the ugly meta state together so that a large working class, as large as possible, can help absorb the Euro's inevitable loss of a significant portion of its value.

This accounts for war sabre rattling, and the ridiculous stories favoring EU that pepper the media lately. EU learned a lesson during Brexit: it is doomed to failure. But it also learned that its insincere humanitarian urges keeping the issue of refugees unreformed in Strasbourg until Britain left, has a payoff at the ballot box which almost guarantees blood in the street must be spilled in order to undo the corruption EU managed to accomplish against Democracy.

In this fashion EU has managed to increase the desperate alternatives which remain to French people in order to try and regain control over the sovereignty of their nation.

EU is a master at pulling the wool over the eyes of working people, managing to shake the confidence of older Britons who are very aware that EU is only sixteen years old. But what EU cannot do is prevent the inevitable: the Euro is doomed. As the date of its divorcement from the PS approaches, this loss of value stands to stabilize at around three-quarters of its total value today.

The wars EU wants with Russia, or US indicates in Korea, are economic counter measures which cannot help, and both know this, leaving the conclusion to be that they are indeed, acts of distraction. For US, the effort is distraction from Syria, and it is an attempt to undo the damage the dollar is suffering post their brilliant display of inadequacy which continues to drive its presence in the region since 2003. For EU, it is reliance on the US dollar to underpin the Euro by means of a prolonged protracted military action against the Antiglobalism capital of the world, Russia. EU and US are not nearly as bound as US and UK, and in global money markets, tradition, and what happened yesterday, they matter more than the mere market manipulations driven by speculators attempting to endow the Euro with life and value which just is not there.

Meanwhile, hopefully watching this are the nations whose elections shall possibly affect their own lack of Eurozone confidence, before the media shell game fully blinds the eyes of working people into accepting fully their funding of a useless meta state. The EU has almost no power to reform itself. And this crisis illustrates clearly that EU's inabilities to act unilaterally have only worsened the state of democracy in Europe.

If Juncker is transferring his accounts to untraceable Grand Cayman banking institutions, should you be worried in the Eurozone?

You only have two choices. No, really, you do not.