And That Moment, All Hell Broke Loose 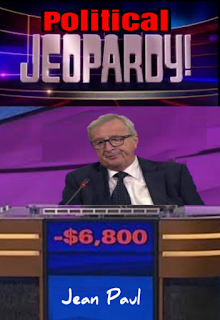 It looms in the aftertaste of Merkel's contentious meeting with Theresa May: someone leaked the details. She leaves 10, Downing Street, more skeptical than she was before? English is done in EU?
Who is John Paul Juncker?
Trouble In Paradise, for 400, please, Alex?

Now that the accusations fly, and Der Spiegel is shrugging its inky shoulders mumbling something about, "We didn't know it was a secret....!"
The French elections are not "in the books, yet", and right now, the EU helmsmen, and woman, are too used to bad news to go presuming that this might not be the beginning of worse. [Note: The French election's results are now in the books. LePen lost, but it was my analysis that she would become president only after she and Melechon build Frexit.]

We anti Globalists want Juncker to remain. He is the best argument for the foolishness of Globalism, and it's linking the ships together so that they all sink due to a few bad choices. But political head hunters within EU structures shall have no problem hanging a LePen victory upon his charge, and shall certainly demand his retirement. He needed Merkel pissing out of the tent with him, not pissing into it!

Why, JP? Why couldn't you shut that ubiquitous trap for just 2 more weeks? You're bad! You're so bad...
And not in the Michael Jackson dyslexic way, either! Who needs WikiLeaks?
at May 06, 2017