Itlay: Dichotomies and All 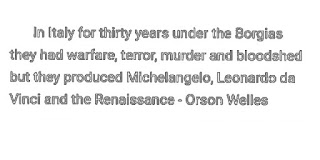 Winston Churchill once referred to Russia as, "A mystery, wrapped inside a riddle, wrapped inside an enigma..."
If this is true, somewhere in the scrolls of darkness creatively expressed resides a more difficult dilemma; what Italy has been to both the world and to Italians, what Italy shall be tomorrow, these and other mystically wound and storied dichotomies remain on the cusp of all expression.

Italians, however, practical as they can be, see the examples of Rome, Florence, and Milan as, "The proof of national validity."
But, mention the Red Brigades kidnapping and murdering their Prime Minister, while the world seemed neither to notice, nor care, and the burgeoning expressions of the realities of the dichotomies which have made simply living a far more complex system of everyday gymnastics, and the heart of the matter begins to show...(PM Aldo Moro was kidnapped and murdered in 1978)

"We gave the world civilization, but we didn't invent, nor imply it's evils."
The majority of Italians may agree on that, but the issues facing Italy today are vaguely reminiscent of the rise of Mussolini, this time, the international community has not revoked a wartime promise, but it has pursued the agendas of Globalism at a vast and very offensive cost. This is offensive to every level of Italian society and the coarse stratifying barriers of political intrigue, scandal, and impassioned risk that falls short. Bankers, and their easy street with the EU sound-off in near death throe levels of hot and cold, back and forth, daily.

Why? Because Italians do not see themselves as Europeans, but as Italians. Their lives are Italian, and why not? They cannot be held, feet to the fire, and simply consent to watching everything fall apart because, as  nations who unify go, Italians do so very easily. Tragedy is not new. Triumph has been in the past, one only need to turn one's head to be reminded.

The banking crisis is, sadly enough, unavoidable. The IMF has not clearly defined a role for itself in cleaning up the disasters individuals within their group worked so hard to create. And Italians do not want more debt.

What Italy can do to ease the magnitude of the crisis is not a one fix, one Parliamentary debate soloution. For within the etiology of their national anxiety lies the resolve for which so much unseen conflict entered like a trojan horse. All that is flawed, all that was inevitably flawed by each resoloution of the EuMP's is within the hard binds of this crisis.
Therefore, the establishment of a two-pronged
approach outwardly, and the resulting repeat of the unbearable condition of austerity, must now apply. And some is already underway.

Italy has alloted herself the right to refuse the intake of more refugees, freeing herself of the insurmountable cost to her coast guard, medical facilities, and food and quarter for indefinite periods of time. Chances are her children's future has been mortaged for this ridiculous foray into social darwinism, but it might be possible for Italians to salvage and afford them a second one.

Until this migration taxing her infrastructure, citizenry, and national security has concluded, the debts will outgrow their gdp, and the cpi, actual value of household goods versus the price tacked on at the cash register to pretend that the people of Denmark, for example, are having to pluck refugees from the Nordsee, shall grow in disparity. This deficit is inflammatory exponentially, while for Denmark, and her smaller economy, and convenient geography, are not even in-step with the outrage.

Italy must continue the Target 2 payments, and there are many reasons to do this, but only if Italexit happens. The attempt to limit the Italian banks from increasing the value of Lire should be evidence enough that the foundations for Italexit are, indeed, inevitable.
The BTI market's value shall certainly endure the Strasbourg hijack already in place, Italians themselves cannot be asked to referenda items which they do not comprehend. But that the Strasbourg hijack is in effect verily is evidence enough: to preserve the Italy of Caeser, Michelangelo, and so many others, they must destroy the one in which two men can wed, and feminism has curdled the women to tits of sows.

However I submit, I submit Globalism must be destroyed, for it is the new Communism.