The Two Mr Vučićs: Who Stole The Serbian Election and Why You Should Care? 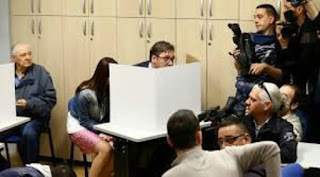 After his EU overlords helped to arrange his re-election as PM in 2016, Aleksander Vučić, seen here ironically in the act of voting in the recent presidential election of April 2, 2017, confers with his omnipresent daughter. How sweet, right?  As the week until the election wound down, he kept his nation's traditional in-roads to Russia very open, much to the concern of both EU Commission President Jean Paul Juncker, and co-pilot, German Chancellor, Angele Merkel.

Serbia is not any more backwards or suspended in decay than Germany. But the government of Serbia is.  However, it is very much a part of the Serb identity to think, breathe, and believe so, in spite of the potential windfalls of a wider EU investment in the people and the future of Serbia.

But there is very good reason for that.

The entrance to opposing the staus quo politically in Serbia is perhaps the slowest in Europe: you need .04% of the electoral census to get your party into Parliament, and if you do not play the insider's ball game, it could be all you ever achieve.

Ever since the poorly concieved, and utterly hypocritical NATO intervention in the late nineties, against Slobodan Milošević, and Vučić (one in the same) whom acted as one of his deputies (and this Vučić I like to call "90's Vučić")  the harrowing message was sent to Serbs: "tolerate breakaway, tolerate the attempted annihilation of your past, or else!" the message has been (unfortunately) taken to heart....all except one of those issues, that is.

The issue of Kosovo is where the choices between EU (Rothschilds/US monies) and Russian monies will come down to bear, for as many pics on Google of Vučić conferring- in-unison with the choir of EU names du jour, he is still a Serb, and Kosovo's status as an independent state, to his mind, is as ridiculous as if gypsies leapt into your back yard, then compelled NATO to murder you into accepting that. And both Juncker, and Merkel, have noticed. Indeed, the very week of the election PM Vučić secured Russian support for Serbia's acquisition of jet fighters, very awesome ones... 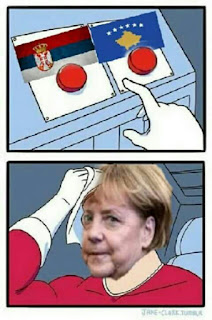 Serbia, or Kosovo?
Kosovo is a member-state of the EU, and has been eyeing current events with great trepidation. Border skirmishes occurred in the weeks prior to the election, but are due to the dissatisfaction of Kosovoans with the EU's Serbian gamble. Serbs do not want war over Kosovo, they want their leaders to be elected by Serbs. Not by the EU.

Presumably, the EU's wedding gift to PM Vučić is to make him President Vučić, and the obviousness to the Serbs of their stolen election became a social media phenomenon, as still on-going protests slowly fizzle, the Serb contempt for both Mr Vučićs, and the EU whom they feel is backing up the election results with force, if necessary, is palapable.

Now the two Mr Vučićs are making press rounds with an heir-apparent to the PM office. Until now, the presidency was a position with little executive or legislative power, but plenty of honorary responsibilities, but the underknown candidate (whose name I refuse to print) is obviously chosen by the two Mr Vučićs in order not to provide any opposition to what shall become a major shift in Serb law: the autocratic presidency. Thereby creating a third Mr Vučić.

All the while, the EU is swearing to fast track Serb induction into both NATO and EU: and I cannot locate one Serb whom wants this.

Provisions in the NATO and EU instruments, as well as the UN, promise to protect a free people when their internal politics are this corrupt. But with EU and FakeNATO, we have the proverbial foxes in charge of the hen houses.

And it could happen ANYWHERE.

This is why you should care.

However I submit, I submit the EU must be destroyed.
Thanks for not listening.
at April 23, 2017