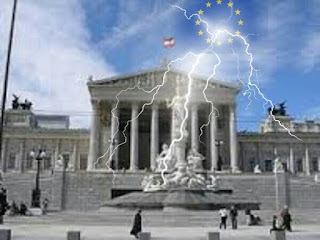 There was a time during the heighths of the Austro-Hungarian Empire, when Vienna was considered the crossraods of the known world.

Then, the Crossroads Were Lost
With a nearly identical political composition in-favor of EU advantages as Sweden, yet only a bit of the anarchy, Austrian Mp's and EUmP's, in-concert with financiers and investment consulting firms on both sides of the Atlantic, were poised to strike a trade deal with both the US and Canada that they believe repudiates the implications of Brexit. Question, in spite of an omnipresent Eurosceptic element since before 2001, is this qualifying statement not just another charge into a mountainside painted to look like a cave?

The Situation
Of the six minority parties embracing Euroscepticism in Austria, not one has enough seats to actually bring a referendum issue, not alone, anyway. Plus, the resulting recoiling from the shock of Brexit actually saw polls citing as much as a 3.5% loss in confidence for an Austrexit, which for all intent and purposes, buried the bridge between Euroscepticism and Austrexit in permanent fashion.

The question, however, is not will Austrexit happen, because in many ways, there will be no choice, because the brighter and farther star shines on a irreversible course of conflict with EU regulators and the Austrian Business Catalyst being assembled.

The Controversy
Trade agreements like the ones being exercised could require a larger force of limitation should Eurozone interests clash with Austrian interests. The "Deregulated/Liberated" business climatology has not matured into the promised-land of a one world business zone once prophesied by EU banking architects. And the strict guidelines for this type of negotiation are not simply going away because the Austrian bankers running these programs are taking advantage of current appearances of legalities.

The Result
This sort of capitalist no-man's-land is the type of item which inevitably shall bring Austrian Eurosceptisism out of the garage bays on the ends of the house and into the center of debate. The reason is simple: only the EU Commision can authorize trade agreements with partners already in agreement, and EU considers this to be a regulatory issue, which means: their turf.

It didn't sit well with EU commisioners. And they basically took over the operation, leaving the basic architecture of both CETA, or the Canadian deal, as well as the Austrian-built US deal intact. Due to the direct competition, the TTIP (the US/Austrian deal which became the US/EU deal) and the subsequent US end of those negotiations have been squelched, while Austrian aircraft manufacturer F List GMBH is moving ahead in Canada with Brexit-like purpose. Indeed, this has prompted more Austrian EU bickering, prompting Jean Paul Juncker to urge a "ceasing of the clownery" from the Austrian Chancellor Christian Kern.
Quit the clowning! Angry EU PM Juncker demands the submission of Austria 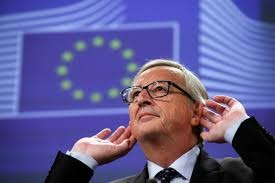 If there is a better EU example of "why this should not be", I would like to see it.

Purely Analysis
Of course, this is a lot of skullduggery. However premature of me to say, this soap-opera resolves itself in the current seat-holding parties in Austrian Euroscepticism emerging to take to the center the voices of every class of Austrian now able to concieve clearly why EU is bad for business.

And we can thank not the Government of Austria, but it's bankers, and their expanded bloodless insurrection against their very own bad idea.


Build A Better Pandora's Box
I began this blog convinced of the death of Euroscepticism within the Austrian character, after all, this is the nation whose historical economic philosophies included tolerating the black market, and were very much, economically-speaking, dyed-in-the-wool libertarians. Thus, I reasoned that joining EU in 2001 meant that something had changed within the culture, and that EU would certainly have killed off any remnant. But now, this appears not to have been the case, whatsoever.

The Pandora's Box of England's assertion of her sovereignty had a number of areas which EU either refused to reform, or just did not take seriously as British complaint, which paved the path of Brexit in many EUmP's minds to have been adolescent-like. But the door slammed shut completely, with all analysts paid to comfort them doing so in very careful wording....

This situation in Austria, which must resolve itself in a more understandable exit platform, can only continue the domino-effect as economics determine. The only reason for businesses to build factories in North America is to get rid of expensive EU industrial regs while retaining the high degree of American manufacture. If EU can create a paper blockade of free economics, then certainly the fuse of that dynamite burns right back to Strasbourg and Brussels.
at April 25, 2017