HorrEUr Down in Strasbourg: 4 Lies The EU Needs You To Believe 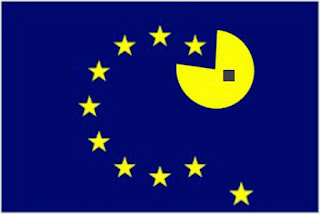 The EU, the European Union, the crowning achievement of the secret cabal of Rothschilds, Zionist Israelis, and truly evil Americans, is not the tip-of-the-iceberg organization which it appears to be. It is a purely economic union for the bankers, and has nothing whatsoever to do with unifying common interests of ordinary European peoples.

It is however, a distant and ineffective mask of the cabal, who's intention for humanity is neither apparant, nor acceptable.
Like the useless and greedy monarchs who's lack of the ability to relate resulted in their eventual and violent overthrows, the EU literally is re-writing the texts of Western Civilization, and of the study and sciences of History, in order to reach a level, in the minds of future generations, that THIS generation would view as monsterous.
Lies of the European Union
1.The EU is sixty years old...
The European Union wishes to send a message of it's pomp and power, which is weakening the world militarily and ecomically, that it is immense and monolithic in the eyes everyone. Now, if you had control, and wanted to do just that, what would you do?

The European Union got together, and decided to pretend that it has been around longer than any other International Organization except for the two that seem to disseminate the will of the global cabal without question: NATO, and the UN.
So, the EU decided that it was indeed a carnation of the earlier Conseil D'Europa. This is, in fact, absolute fallacy. But when my generation dies, who will know?
The Conseil D'Europa had no such powers, included Soviet Russia, and members of the Warsaw Pact, and was, in essence, a group assembled to monitor the postwar economies of Europe.

The EU actually came into existence on January 15, 2001, after the 1999 UK "keep the Pound, or surrender it for the Euro?" referendum resulted in the spirit of convoloution entering the picture by way of the Kettinger Treaty, which declared a compromise which sows the only seeds of the annihalation, across the national spectrums, of this vile paper plague on man; for it entertwined enough national pride into EU DNA to eventually allow the Treaty of Lisbon, which has several articles, one of which, Article 50, was the culmination of the earlier UK hesitation to enter, in the first place. Article 50 allows for exit, appointing an exit committee, (further proof of the debate-laden German legislative DNA which results in the ineffectiveness of this union) and a two year period of time, during which, any nation can divorce it's affairs from the EU.

2.The EU represents the betterment of humanity
The Rothschilds Banking Org, via the EU, has engaged in a systematically vile distraction: whilst this banking conglomerate is legally liberating itself from the duty fees once paid for handling the many currencies of Europe, it has sponsored an age of liberation, immigration, and the EU is this group's public face.

The demoralizing of the human condition via sexual identity disorders being re-classified as "lifestyle choices", then being programmed into the current generation as though it has been this way for sixty years, represents a heavy-handed and railing manipulation of fact. In fact, this is the silver-lining which all leaders must abide:
power, without morality, is the impossibilty of reason.

Abiding this principle, we have two camps in the EU Parliament in Strasbourgh, France: the pro EU camp, and the Eurosceptic camp.

3. The EU enjoys a good relationship with NATO
This is, in fact, impossible, since NATO's charter states that it's mission was fulfilled in  1991. What persists is neither NATO, nor has very much of anything American except money.
But it has become the military wing of this hugely disproportionate bad idea, and Russia, and any nation whom resists the Zionist control over their culture, and the ensuing social and jewish-centric Darwinism, such as that of the refugee crisis, is staring at NATO in order to defend Christianity, and the morale of it's citizens.

Does anyone here remember, Russia is our ally, and World War Two was won at a huge human cost in Stalingrad?

Many Christians are beginning to associate the Biblical passages, "....thou hast weakened the nations..." with the forces guiding the EU to act so harshly against loving your nation, or Truth, history, whatever it is that is real, which the EU has claimed is not.

4. The EU is being operated by European interests, and Europeans, themselves

The EU is actually a sleight-of-hand trick, in the world of international organizations. It is the demonstration of the old addage, "The road to hell is paved with good-intention" albeit that good intention lay solely upon it's surface. The EU simply completed a legislative version of the intents of the wicked men whom created the Tri Lateral Commision. Leg one, London to Tel Aviv, leg two, Tel Aviv to Washington, DC, and leg three, Washington, DC to London.

The CIA interfering in the French elections of April, 2017, on the heels of Trump betraying AntiGlobalism, how can this be European?
What stake does the CIA have in doing so, and did they hack the Netherland Election earlier this year?

If you're the CIA, consolidating the Parliaments of EU member-states, and the EU itself, has many economic, intelligence, and potentially military benefits, as well as places EU in America's debt. Like Iran, however, this is doomed to fail, by that old George Santayanna quote...regarding how and why history repeats itself.

Wonderfully, however, and to the appalling shock of the House of Lords, the working people of England, HQ of the scars- behind -the -mask Rothschilds, decided that they deserve more than the accusations against the immorality brought by the Tel Aviv leg against the national tolerance of demoralization, and they cast off the yoke, and lies, of the EU.

As the cracks spread and unite, the factual basis for fear will begin to be revealed:  usury is a mortal sin. And unless your last name is DeMedici, usury shall always bring great manic periods of  short-lived success, followed by long, dark periods of war's bloody embryonic synthesis.