Fuge State: Can Sweden Be Saved? 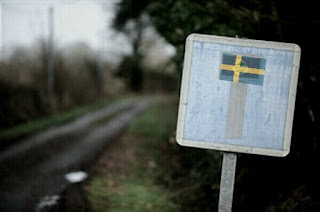 Do not enter. When Trump said Sweden is a war-zone, he didn't know the half of it.
Sweden is in a state of austere panic, paralyzed flight, and loss of identity. The source of this is not solely the Asylum Seekers, although they are, at least, a part of the problem. The Swedes, themselves, are a component of the contraversy. The response from the Swedes  range from a slim minority of sane people on both ends of the political spectrum, to a very large and out of touch majority whom is not going to be as safe in the Volvo of state they are driving as the manufacturer told them they would be. You know, just like Germany. And, as in Germany, it is the statesmen who are supposed to protect Sweden who are failing thier public's well-being.

By now typical in EU, the NWO has compelled the "everthing's ok, do not look" policy, and for a sustained period of time perpetrated outright fallacies in the media, questioning the veracity of the "55 No Go Zones", and attempting to mount a campaign to ridicule any such notions. Oddly enough, the statistics of immigration see records of numbers of Asylum Seekers annually, while simultaneously, criminal statistics are also rising to record numbers....somehow. 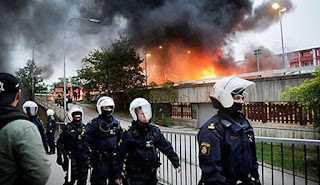 Riots like these are typical throughout EU and even in areas like Serbia, not yet a member state of EU. 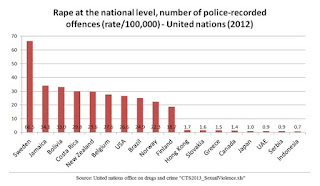 Sweden: Rape capital of the Western World
The fact that Swedish officials are engaged in lies is obviously driven by ulterior motives. But, when one includes the fact that the evidence to be gathered to contradict them requires their consent, then the clarity comes:  this is the very definition of repressive.

Mortified pride is an antiquated medical term  to describe a psychiatric patient whose loss of touch with his self esteem and identity made for a unkempt, uncaring, and lost persona. It comes close to the polarized and alienated twice told tales eminating from both PM Stefan Lofven's office, as well as the horror stories told by Swedish police officers, and the population itself, remembering, of course, this is the nation whom coined the term for a socio-psychological condition in which the victims of a crime empathize a tic too much...

A better word is fuge state, which describes a flight-in-confusion, by someone whom has been somehow compelled by trauma to forget who they are, as in amnesia.
And the mortification of pride is also true.
For the citizenry, their pride is being subjected to mortification. For the EU screwboys, it is pride sold for profit. And their national identity is most likely gone for good, no matter how you look at it.
As the last remnants of their pride vanish in the light of social media as well as clever journalists whom challenge the pretense that nothing is wrong in Sweden, that pride loses value. And it is inevitable, because I cannot locate one Swede whom agrees with the Swedish government.

But we can find these on Google searches, bobbing and weaving among the same fake news names whose promised Clinton victory was always conspicuous to political scientests such as yours truly.
https://twitter.com/Timcast/status/836934364772589569

The elections in Sweden will not need the EU to fix them, for the EU will soon need to provide relief to the Swedes sold on the lies, yet somehow...seeking other nation's indulgence as they flee the irreparable harm they have both done to themselves, and that Sweden's Gov has inflicted upon them. And, in their amnesia-like stupor, they will prefer the ones whom abuse them the most. Thus, the EU/CIA doesn't need to fix Swedish elections, but they will soon need to fix Sweden. Because like it or not, where there's smoke, there's fire.
at April 24, 2017